Always looking for fun ways to improve my riding, particularly the dirt skills, when my pal Anke told me that she and her boyfriend Mike were signed up for the California Supermoto School’s 1-day dirt class I jumped right on board. Their other three friends Jeff, Conan and Jake joined us and we had an excited group.

We left Berkeley around 830am Sunday this past Sunday and got up to the Prarie City SVRA past Sacramento just before the 1030 start time. The end-of-April weather was near perfect in the morning, around 68 degrees, and it never got much hotter 80 the whole day for which we were grateful considering how much work we did on the track. Outside of a twenty minute break for lunch we were on the bikes for eight minute rounds throughout the day. The six of us were put into one group (B) and there were six others including two girls who I knew from SF who formed Group A.  Turns out I also recognized one of the instructors, a guy named Michael who worked in the service department at Scuderia West back in the early 2000’s. 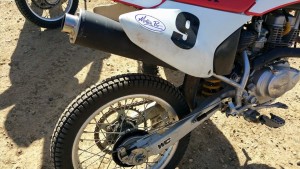 Most of the bikes were Honda single cylinder 150’s with a few being 100’s and one 230cc bike. They all had a standard 21 inch rim up front with dirt tires and a 17 inch rear with Supermoto rubber. Drum brakes. I shared a 150 with a girl from the A group. In terms of riding experience among our six I would say that myself and two of the other guys had the most dirt hours but all of the others had some serious street cred as they do many track days throughout the year. Anke learned to ride a motorcycle years ago back in Germany but never got her license herein CA until two years ago. When she and Mike started dating she joined in for the track days and the two of them recently participated in one of those super cool gymkhana events. In short, it was an experienced group of motorbikers. The A group was a mixed bag. One of the guys had previously done a CA Supermoto class and was back for a second helping. Some of the girls had zero to limited off-road experience but I believe all have been riding awhile. I think it’s safe to say, all twelve of us were humble and eager to learn some new stuff.

After basic ground rules were established we got our first turn on the track and proceeded somewhat gently as you would expect. We were instructed to shift up to 3rd gear and keep it there which was an interesting concept but since the track isn’t more than 75 yards long and is 40 feet wide there really is no need for shifting. Nor –as it turns out- is there much need for the the front brake OR clutch (as I will later find out).

Perhaps a handful of the dozen of us had any experience with drifting so I played with it as I knew how. When dual sporting I’ve become accustomed to dragging the rear brake while on the gas for control in steeps and cornering so when one of the instructors pulled me aside to remind me to bring my foot off the brake pedal he was interested to learn that I had been doing it on purpose. He was trying to explain the concept of gassing out of the corners and hard to the end of the straights but getting off the throttle and riding the back brake just to bust the rear wheel loose and slide the bike around corners. Shutting off the gas did not fully compute in the beginning because I am used to some maintenance throttle all the way through corners. Of course it’s a timing thing which I improved on immensely throughout the day, as did just about everyone else. And when you get it right it is truly a thing of beauty.

Early on I had some trouble with the proper application of brake pressure and fishtailed a bunch of times. I actually did lose the back end and low-side when we were doing small space 180 degree drills but that is exactly what I came to work on. Eventually –to my delight- I was able to correct although I wouldn’t say I’ve got it down to a science just yet. Especially on the right handers where you cannot have that foot simultaneously on the brake and on the ground. 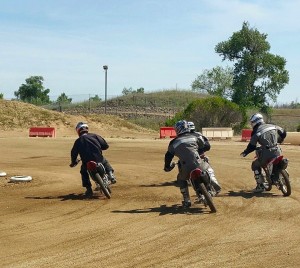 We figured out pretty early who the fast people were and let them get to the front of the pack when we rolled onto the track. Mike was clearly the jackrabbit of our crew. He passed us all at least once every session but as the day progressed I could see myself not only passing others but that Mike was no longer lapping me. I had a great time trying to figure out how to get around people as they were all quite accustomed to being on a tarmac circuit with other riders and knew how to block passing lanes. Anke was particularly good at it. Most of those guys were rather skilled in that regard and it’s clear we were all lit up by the competitive spirit. 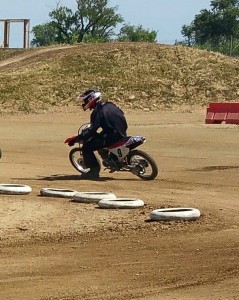 Breaking the back wheel loose on a corner.

By the day’s final round I have to admit I was stoked when Mike turned to me and said “you’re on pole, dude.” What? Cool! I mean, honestly I’m not used to being chased; always the chaser. (Most of that experience coming from foot races.) But I was down for the new experience and for the challenge of corralling my nervous energy. We got onto the oval and as standard practice began with some caution since the coaches typically water down the corner exits in between groups. Too zealous with the throttle and you’ll wash out real quick. But I was becoming more adept with my two remaining controls and getting the weighting correct so I managed to keep the bike upright in those critical spots. Even so, on the 3rd go-round as I set myself up to enter the corner from outside in I somehow lost the back end and watched everyone blow past while I tried to safely get my bike out of the way. That ain’t easy when you’re pushing uphill on a cambered track with your bike in gear and you discover that the clutch lever has broken off. Dang! Just as I was starting to get “good” my day suddenly appeared to have come to a premature ending. Over strode coach Brok Mcallister who said, “Don’t worry bud, we’ll get you going again. Hop on and I’ll push as you pop up to 2nd gear, kick it to 3rd and you’re off. You’re not going to need the clutch anyway.” And he was right. Within moments I was back to ripping around the circuit reeling in my friends and trying to get as sideways as I could on the corners. What a blast! When the checkered flag eventually signaled us in I can tell you, I very much wanted to keep playing. This is the kind of shit that truly feeds the soul. 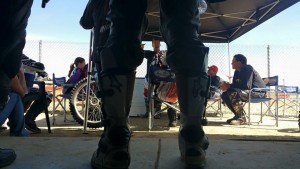 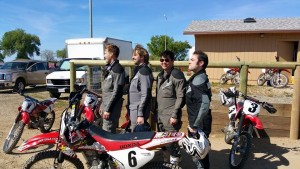 Are we DEVO?? Naw, just a bunch of dudes in Aerostitch suits.

The latest in motorcycle fashion.

After class we took some photos and hung out for at least another hour with the entire group and the coaches. I am really appreciative of the coaches’ collective knowledge, their clear and patient direction and their own obvious satisfaction at observing the participants’ improvements throughout the day.

Already I’m scheming up another trip to California Supermoto School. I might just have to try the asphalt version next!

This entry was posted in Uncategorized. Bookmark the permalink.