Ten(ish) tips to avoid having your motorcycle or scooter knocked over.

After my friend Anu posted that his motorcycle had been knocked over while parked and the driver that did it took off I thought I’d list a few tricks that might help others avoid the same infuriating fate.

Sadly, there is an insufficient number of motorcycle parking spaces relative to the number of registered bikes in San Francisco and that divide will grow faster than the city can or will act on the issue. Our area in particular has seen a steady increase in motorcyclists over the last decade and there’s no question more cars are on the road as well due to the swelling population brought on chiefly by our latest tech boom. While the City Hall and developers are addressing the need for more housing (there seems to be a new residential high rise going up on every block in some neighborhoods) public transportation remains …um, “sub-par” and the streets have become bottle-necked from early morning until middle of the evening throughout the week. We on two wheels (bicycles included) can take some pride from the fact that we contribute to the traffic solution thanks in large part to legalized lane splitting but still, we are forced to become ever more creative in our parking efforts.

Far too often I hear tales of motorbikes getting plowed over by cars (it’s happened to me countless times) and, disappointingly in this town full of self-professed do-gooders, the car typically bolts without leaving a note or taking responsibility. It is irritating at best and quite costly for the motorcycle owner at worst. -Oh, and last I checked that shit is illegal.

While I am certain that these suggestions can benefit motorcyclists everywhere I am specifically reaching out to Bay Area riders because the rules of the road are diverse from region to region and I’ve developed these methods primarily while commuting in and around San Francisco. It takes a good several days in every city to get a real sense of what is or is not permissible (sidewalk parking being one example) and some things just aren’t that obvious. Regardless, I hope I can save a few bike owners some cash and quite a bit of heartache with these tips.

1.  In the likely case that there is no dedicated motorcycle parking nearby park your bike at “shorty” curbs. These are curbs that are too short length-wise for cars to park in. You generally find them in between driveways of homes and businesses. Where possible please make room for other bikes to join you. Don’t be a space hog and park your Goldwing parallel to the curb, dude. Once you’re in that spot no car can park there. You just cost two other bikes a parking spot.

2.  Where no shorty curb is available, and given the choice, park at the curb ends rather than in the middle to avoid getting sandwiched between larger vehicles.

3.  Try to park in front of a four-wheeled vehicle rather than behind it. Bikes and scooters usually get knocked down when cars are backing out of spaces and they do not see the bike in the rear-view.

4.  If you must park behind a four-wheeled vehicle note that your bike might be shorter length-wise than the car is wide so the car driver won’t see your bike from their side view mirror. And taller vehicles often cannot see your bike from their rear view either. You can do two things that will reduce the likelihood that your bike will end up on its side: First, park slightly away from the curb so that your bike sticks out just a bit and is visible from the side view of the car in front. Second, leave a little note on the car saying something simple like “Careful backing out please. Moto behind you. Thanks!” The driver ought to appreciate that and take greater care in their maneuvers. Yes, I do carry a small note pad with me. They cost like .99 at Walgreens.

5.  Parking on the sidewalk will surely keep your bike from getting knocked over by a car but sidewalk parking is illegal in SF. Last year I got a sidewalk ticket and the fine was up to a jaw-dropping $110. This is likely because the parking code does not distinguish between cars which block walkways and piss off old ladies and motorbikes that really do not. That said, there is a get-around. As I understand it, if your bike is within property lines at any point along a block you cannot be ticketed (legally) as the sidewalk is only as wide as it’s shortest point on the whole block. If there is a set of stairs or overhang extending from a home you should be able to park your motorcycle against your frontage and not get a ticket. Here’s the legislation. It’s a really fun read.

6.  Additionally on sidewalk parking, although it is a ticketable offense, there are definitely some areas where that is unlikely that your bike will get tagged. I would not park my motorcycle or scooter on the sidewalk anywhere near downtown or any other busy commercial district. However, I would –and have on many occasions- park on sidewalks in quieter residential neighborhoods, side streets off of main thoroughfares and in more outlying districts. Rarely will you get a sidewalk ticket unless someone with nothing better to do complains.

7.  Park on the sides of parklets between their ends and the rubber car bumper that is set into the pavement perpendicular to the curb to keep cars from backing into them. As of this writing there is no traffic code making parking there illegal. 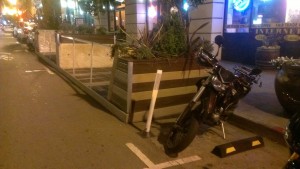 8.  Not a guarantee that your bike will not get backed into but less likely that it will get knocked on its side is the old trick of parking it at an angle to the curb. 40 to 45 degrees should do it in most cases. The thought being that if a car taps your bike while backing out of a spot it will just bang the rear wheel and the driver may hear the sound or feel the contact then freeze before sending the bike over whereas if your bike is 90 degrees to the curb the whole thing gets hit square and it’ll be down in one shot. That’s the theory anyway.

10.  Employ some fun pre-emptive measures such as an air horn that goes off on contact or dastardly metal spikes! Not really. Satisfyingly vindictive as that may be, please have the forethought to recognize that if you piss off some high strung finance dude or damage his Beemer your bike could get knocked over by his Cole Haans anyway. (Yeah, this is the same shitbag who would probably take off after his car did the same to your bike.) So maybe just stick to the other methods.

There you have it. And if you do happen to witness the act as I have a couple of times try not to take it personally. The driver does not know you, isn’t out to get you and you should not assume that they would flee the scene without leaving a note had you not been there. Just be courteous (even if you do slip in a sarcastic remark about their craptastic driving abilities), get their info. and call it a day.

This entry was posted in Uncategorized. Bookmark the permalink.